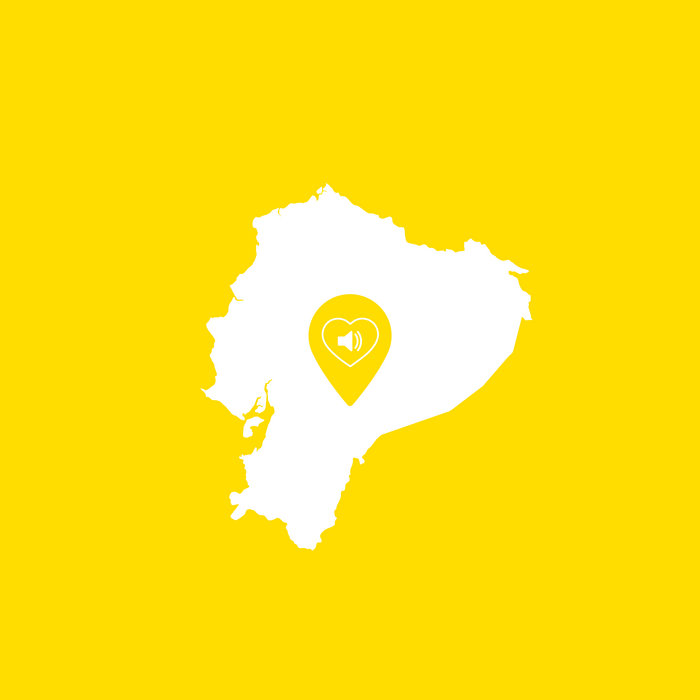 The Ecuadorian electronic music scene is characterized by the diversity of its expressions. Like its geography, it holds unexpected transformations behind every other mountain. The influences that have reached our world come from all over the place, and in an introspective world full of wide open views and steeply shifting horizon lines, we are compelled to take all this data in and reprocess it, combining it with what is ours, and what is of this land, to create individual expressions that hold many worlds within them.

We are all involved in a conversation as wide as it is old. The music that we are making is connected to something much older than us. This particular combination is focused on the people I have come to know, mostly around the city of Quito, and also to the southern parts of the Andes, the province of Imbabura, and the northern reaches of the province of Carchi.

The Ecuadorian scene is a producer’s scene, where audiences are not enormous, and electronic music is produced for the pleasure of producing it. In an odd way this has led to very genuine expressions which at the same time make our producers quite unique and interesting to the outside world, and have in turn raised the quality and scope of what we are making. We are not isolated per se, it’s more as though we reach the mass consciousness by going inward.

There are strings that hold us together; our music gets to the future by going to the roots, our mountainous megadiversity brings us together, as does the psychoactivity of living in this place. We make psychoactive sounds, from a country covered in psychedelic plants, and horizons which enliven the imagination. It’s not about hype. we are all just here, making music, for its own sake, and ours. - ​Quixosis, Quito 2020

The Waorani, who currently number around 2,000, once maintained one of the largest territories of all indigenous Amazonians in Ecuador. ​Recently, the Waorani had filed a lawsuit against the Ecuadorian government for not properly consulting with them before opening up their territory to potential oil exploration. Ecuador has divided much of its portion of the Amazon into blocks to lease the mineral rights in an international auction.

The crux of the lawsuit was the Waorani’s claim that the government had not properly consulted their community about the oil auction. Nenquimo told me that representatives from the Ministry of Energy and Non-renewable Resources came to her village in 2012, seeking community members’ consent for the auction, but she and her family were out on a hunting trip and didn’t meet with them.

Mitch Anderson, the founder of Amazon Frontlines, a non-governmental organization (N.G.O.) that works with the Waorani and other indigenous groups on sovereignty and environmental issues, said that the consultations were treated as a box that needed to be checked off, rather than as a serious discussion with the community about the impact of introducing oil extraction into the forest lands and rivers where they hunt and fish. Anderson said that language barriers and short visits made the process even more opaque.

On ​April 26, 2019, the Waorani people of Pastaza won a historic ruling in Ecuadorian court protecting half a million acres of their territory in the Amazon rainforest from being earmarked for oil drilling. The decision by the three-judge panel of the Pastaza Provincial Court immediately voids the consultation process with the Waorani undertaken by the Ecuadorian government in 2012, indefinitely suspending the auctioning of their lands to oil companies. The verdict also ​disrupts the contemplated auctioning of 16 oil blocks that cover over 7 million acres of indigenous territory​ by providing an invaluable legal precedent for other indigenous nations across the Ecuadorian Amazon.

Just days before the Waorani victory, a coalition of Latin-American journalists unveiled a new reporting project, “​Tierra de Resistentes​” (“Land of Resistants”), focussed on the dangers that face environmental activists. Their reporting showed that advocates from ethnic minorities—particularly indigenous people—face a high risk of violent attack from supporters of mining, logging, and other industries. The project, which is supported by Deutsche Welle Akademie, the Pulitzer Center, and others, opens by declaring, “Defending the jungles, mountains, forests and rivers of Latin America has never been this dangerous.” One aspect of the project is a database, compiled by thirty journalists, from Bolivia, Brazil, Peru, Colombia, Ecuador, Mexico, and Guatemala, which documents more than thirteen hundred attacks on environmentalists that took place in these seven countries during a ten-year period, and the project includes in-depth stories about sixteen individual cases.

Indigenious communities need to be protected and supported worldwide. ​In many cases, legally recognized tribes are sovereign governments and therefore can set climate policies independently of federal or state governments. The laws passed and programs adopted by tribes have the potential to significantly improve their resilience in the face of climate risks. Underfunded and lacking resources, these communities are frequently exploited, removed, or killed in the pursuit of fossil fuels and commodities.

Their mission is to support the struggles of indigenous peoples to defend their rights to land, life and cultural survival in the Amazon Rainforest. Proceeds from the sales of Place : Ecuador will go to this Partner Organization.

Help move the thinking on electronic and dance music as more than the party, but a platform that socially activates, like the great traditions of Detroit, Berlin, global squat culture, and progressive social and political movements.

The project creates country or regionally specific electronic music compilations where the proceeds are donated to local groups working on social causes.

We highlight the local producers, and bring awareness to the social causes that are important to the creative community there, while celebrating ​electronic music as an egalitarian, classless, and empowering art form.